From AIBO WIKI
Jump to navigation Jump to search

Party Mascot (ERF-210AW03) is AIBOWARE for the ERS-210 platform that utilizes AIBO as a participant and/or director of various party-oriented games.

AIBO emits different sounds when the head or back sensor is touched. After the user says "START", AIBO's paws can be used to navigate between the four different sound sets.

After saying "START", AIBO walks around in a semi-random pattern and chooses a winner.

AIBO counts down for a specified time (navigable by using the paw buttons.) After "START" is said, AIBO plays music and moves until the timer elapses.

Countdown 2 is identical in function to Countdown 1, with the exception of the timer being reset when the head sensor is pressed.

In "guess the word", AIBO learns a word from one player, while the rest of the participants must guess what AIBO is saying.

This is a game in which AIBO uses its own special language to say a word that it was taught, and people try to guess what it is.

Athletic AIBO utilizes 2+ AIBOs for use in AIBO vs AIBO games.

This is a game to find out who can guide AIBO (by leading it with the pink ball supplied with AIBO) through a given course to the finish line the fastest.

In this mode, you take AIBO for a walk by guiding it by your voice. You can use this mode in many ways. For example, you can make a maze and help AIBO escape from it.

For this mode, two AIBOs and the pink ball supplied with AIBO are required: one AIBO for the attacker and the other one for the defender.

Two AIBOs have a contest on who can find the pink ball first.

AIBO the Entertainer contains various modes that use AIBO itself as the game.

In this mode, AIBO performs any of six songs and the dances that it already knows.

In this mode, AIBO carries a present in its mouth and takes it to somebody who gets it.

In this game, AIBO strikes a pose and the players try to copy the pose.

This game requires fast reflexes. If you make it to the end of the game, AIBO will treat you to a special pose.

This game is more difficult than reflex game 1. AIBO moves its ears and tail.

With the use of the supplied color cards, you can play Rock-paper-scissors with AIBO. Pink is rock, green is paper, and blue is scissors. 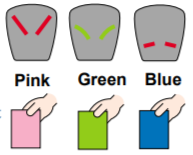 Some Party Mascot games are dependent on supplied color cards. Sensor test allows you to test whether or not AIBO can detect these cards in current lighting conditions. To activate sensor test, press and hold the chin sensor and back sensor for 3 seconds. To leave sensor test, press the chin sensor. Put the card in front of AIBO's nose, and AIBO will light it's eyes depending on which color it detects.

When AIBO's battery is low, it enters hungry mode and will not start game selection. Holding AIBO's chin sensor for 3 seconds during category selection will also activate hungry mode.

Occurs when AIBO detects stress or obstruction between it's servos.

Occurs when you pick AIBO up.

Mirrors to the Party Mascot image are coming soon. Remember that you must have a legitimate AIBO Dancer stick to utilize these images.

Retrieved from "https://aibo.miraheze.org/w/index.php?title=Party_Mascot&oldid=303"
Categories:
Cookies help us deliver our services. By using our services, you agree to our use of cookies.